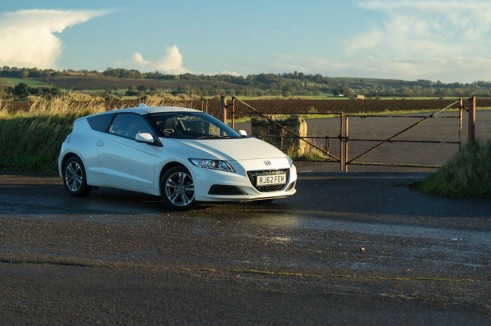 Honda released the CR-Z in 2010, the idea behind it was to make a car that was “sporty, incredibly efficient and inexpensive”. It is the spiritual successor to the CR-X, a compact sports car from the 80’s, to me it’s more like the second generation Honda Insight, it has a similar look in many ways.

With a 1.5 litre Petrol Engine making 119 BHP, coupled with an electric motor producing 19 BHP, total power is 135 BHP – due to different peak output times. Total Torque is 190 Nm, all this enables the CR-Z to get to 60 in 9.1 seconds…not bad but about 2 seconds off what is considered ‘Sporty’ nowadays.

Our test car was in entry level Sport trim, the only extra was the pearlescent white paintwork at £450 bringing the total to £21,000. 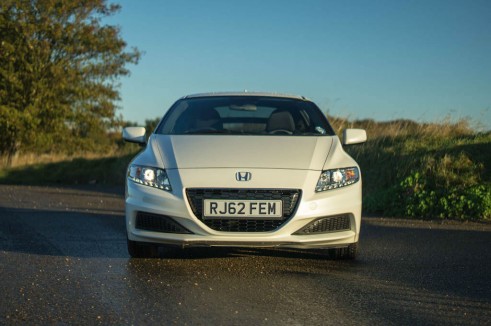 As we mentioned before the CR-Z is very much the modern take on the first gen Insight. The way the rear tapers in, the rear quarter windows and even the all glass rear hatch, it’s all Honda Insight in looks.

Obviously its far better looking and brought up to date, but it should have really been called an Insight! 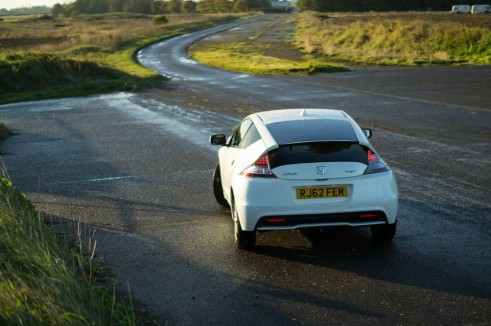 It’s a sporty little thing, with angular wedgey lines and a small floating front grille. The rear wheels bulge out of the tapered sides giving it a wider stance at the rear, a new aerodynamic rear diffuser has been added with the 2013 facelift.

I love it, low, sleek, modern and different! 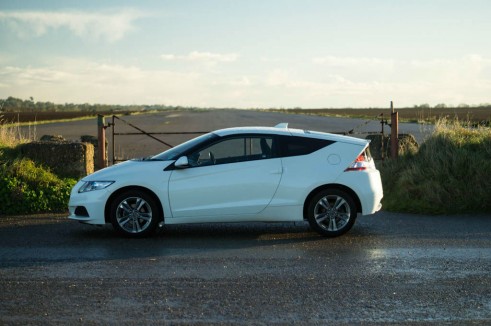 With 119 BHP at your disposal the CR-Z is never going to set the world alight. Weighing only 1159 KG’s helps keep the Honda feeling fairly sporty. Rev it hard enough and it accelerates rather well, but overall it just feels a bit gutless.

With the new S+ electric boost button I was expecting a ‘NOS’ scene from Fast & Furious when I pressed it…I was disappointed! You can barely feel the electric assist, it gives you a very slight push but that’s all…i was expecting to have lightning quick EV acceleration as soon as I pressed that little button. 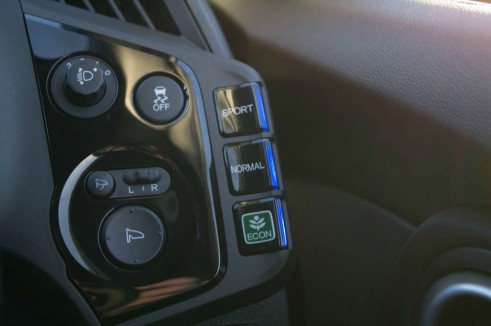 You can drive the CR-Z in three different modes, Normal, Eco and Sport. Changing between these three modes you can really feel the car change; press the Eco button and instantly the car pulls back and starts accelerating less. Change to Sport mode and the throttle becomes ultra-sensitive, it feels as though someone has just lifted the lid on more power. It’s a clever system and to feel the changes so much was very impressive. 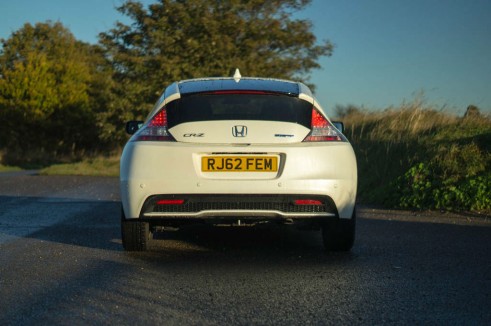 Handling is superb, I have never driven such a mainstream everyday car that handles so well. There is practically no weight transfer in corners, its just glued to the road. Under braking the nose dips slightly but its no drama.

Regenerative breaking helps you recharge those batteries, along with power from the engine. Honda’s IMA (Integrated Motor Assist) helps with acceleration only, so you can’t cruise around in silent bliss with this little coupé.

When you do let the revs climb to 6,000 you are met with a rather loud, raw cry from the engine, we found the CR-Z was most fun in 3rd gear sitting around 5,000 RPM this gives you pretty instant acceleration and enables you to have a hoot around B roads. 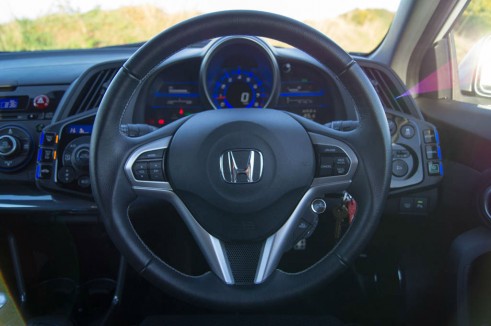 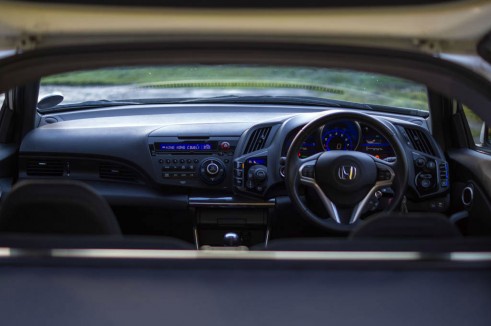 Inside the CR-Z you are met with a driver focussed dash, everything is within reach and angled toward the pilot. We particularly liked the small, single dialled heating controls. Right next to the steering wheel they are neat and in the perfect position, far too many manufacturers spread these controls out over the whole centre console when it’s just not needed.

Some of the upper dash plastics are a little hard and cheap looking, lower down you find no centre console just a cubby hole for your iPod and some cup holders. It’s nicely designed but minimal – it works!

Honda have done a superb job with the stereo, a built in boot sub gives superb clear bass.

The driving position is low, with the comfy front seats hugging you just enough to keep you in place. Your rear view is hampered slightly by a rear cross beam where the smaller rear windscreen meets the top hatchback, but if you keep an eye on your mirrors it doesn’t hinder you too much.

Now I have never seen the point in putting rear seats in 2+2’s, the CR-Z is no exception. They are just pointless, even if you have legs as wide as stick man your head would still hit the roofline as it lowers right where the rear seats start. Just get rid of them Honda. Make the boot bigger, or turn it into storage. 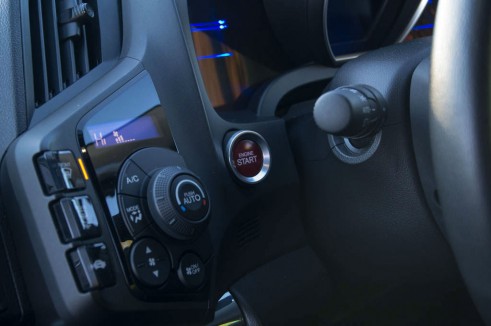 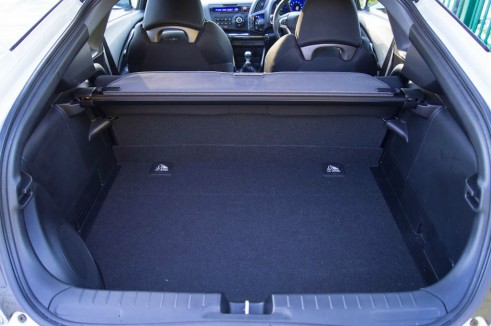 Boot space is pretty good, at 207 litres with the tonneau cover in place we easily managed to fit a few overnight bags in for a weekend away. Below the boot floor are the battery packs, you also don’t get a spare wheel just an inflation kit. 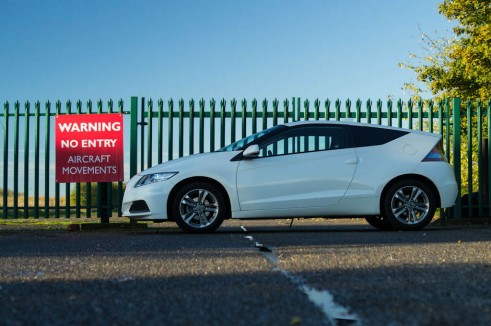 As much as I love the Honda CR-Z for its good looks, sporty handling and lightweight characteristics… I think it’s trying to be too many things…put it in Sport mode whilst driving briskly and the MPG nose dives.

You just can’t have a Hybrid Sports Car, superb MPG and blistering performance don’t go hand in hand. Over 340 miles we only managed 45 MPG, nearly 300 of those miles where with the car in Eco mode. Honda’s Urban MPG claim is 47.1, Combined is 56.5.

We achieved far better MPG out of the 1.6 Diesel Civic we tested earlier in the year, this even felt sporty enough to have fun in. The Civic is a proper hatch for 4 people too!

Honda should have split the CR-Z line up. Create a hybrid with superb MPG, forget all the Sport modes and be done with it. Then create a 200 BHP monster, ditch the hybrid completely or have turbo/supercharger that can be fully turned off for ‘Green’ driving on long journeys.

This would then separate the confusion that the poor CR-Z faces. 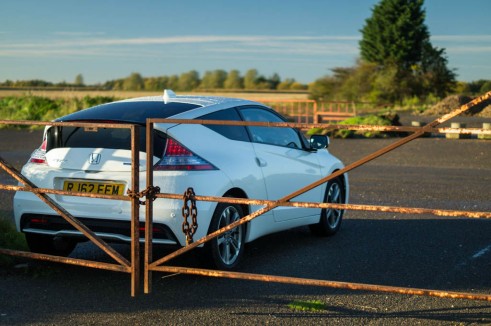 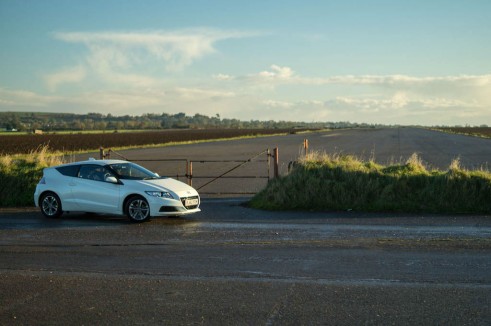 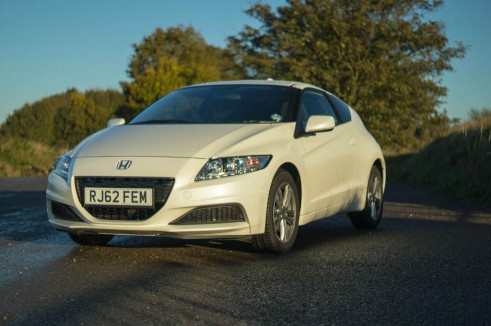