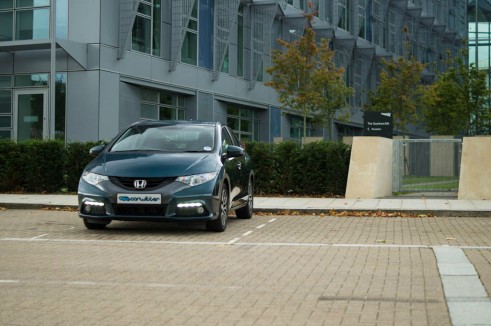 Honda famously broke the traditional mould when they released the FN2 Honda Civic back in 2007, they made a huge leap and went all space age both inside and out. It’s now in its 9th generation so how does it stack up?

Our test model is the 1.6 i-DTEC in middle of the range ES trim level, with 118 BHP and 300 Nm of torque it shifts from 0-60 in 10.2 seconds. All for a rather affordable £21,280 – the only extra on our car was the pearlescent Woodland Green Pearl paint…which nobody in their right mind would choose. 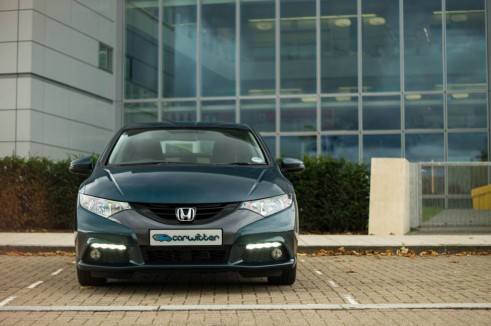 I have always loved the look of the previous generation Civic, it was bold, a big statement and a big gamble on Honda’s part. But it paid off! They have tweaked the design somewhat with the latest model, it still has its low wedge like shape with a high, split rear window.

Height has been reduced by 10mm and the car widened by 20mm over the old model, and it really gives it a lower, meaner appearance. From the side you notice the doors pinch in slightly toward the bottom, whilst the top lines start over the front and rear wheel arches before vanishing into the doors.

Up front a dark grey plastic band joins the headlights and dips down toward the lower front lip, a black gloss grille houses the H moniker. Daytime running lights sit directly above the fog lights and accentuate the Civics wide stance. 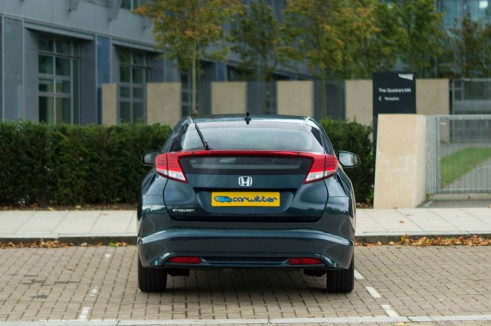 At the rear the split glass boot lid remains, the brake lights are set at the outermost edge of the cars body joined by the built-in spoiler/third brake light.

Overall it looks good, meaner and more defined than the previous version, it’s not vastly different externally but the changes are smart and up to date.

Out of eight colour choices we had Woodland Green…it has to be the most drab and boring. The only two ‘free’ solid colours are Deep Ocean Blue and Milano Red, the rest cost an extra £500. 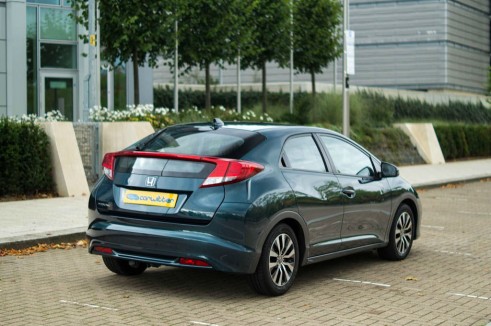 Now with only 118 BHP you think this rather large hatchback will be slow and left wanting. It isn’t! The new 1.6 i-DTEC power plant is brilliant. Making a huge 300Nm of torque makes the Civic feel punchier than it is.

We drove it over 400 miles and never did we feel like it had run out of puff, or that it needed more go to it. It’s more than adequate, especially when it is complemented by such a great 6 speed gearbox, changes are short and precise whilst the gearing helps to keep the Honda feeling nippy. On a motorway you can whack it in 6th and cruise idly at 70 with the engine nearly on tick over.

Oh, and whilst you are there cruising at 70 you will be getting astonishing MPG, we drove 320 miles up and down the M1 and achieved 67 MPG, all the way sitting at 70 MPH.

I couldn’t believe it, 320 miles and you are still left with just under half a tank of diesel, who needs electric cars when diesels can be THIS good?! 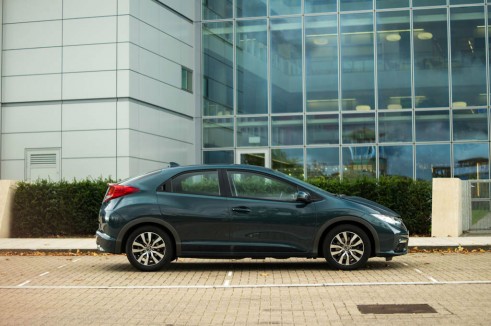 Over that long motorway journey the Civic was great, very comfortable and it handled the road imperfections with nothing more than a dull thud. It was the perfect motorway cruiser.

Taking it along some country lanes didn’t disappoint either! Keep the civic in 4th at 4,000 RPM and you are welcomed by instant acceleration, this coupled with the excellent handling and you have a joy to drive.

The Civic just feels so light, it’s a big car but when you hit some B roads it feels so much smaller, corners are handled with confidence inspiring grip as the car stays really well balanced.

Steering isn’t the best, its slow to initially turn dead of centre but eventually the wheels will move. Also there is a rather disconnected sensation, there is no feedback what so ever through the steering wheel. A more direct, connected feel would have been nice. 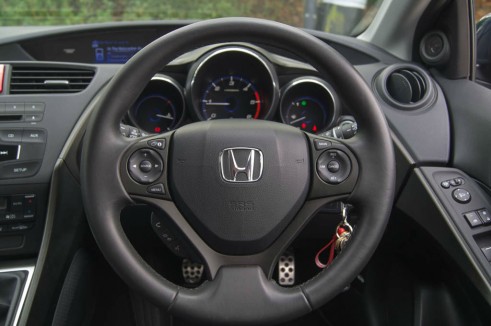 Inside the Civic is pretty good, build quality can’t be faulted, it’s all solid and well screwed together with no creaks or rattles over even the harshest of surfaces. The dash is purely driver focussed, everything is angled toward you; and even the door has extended wrap around style trim that houses the window and mirror switches. 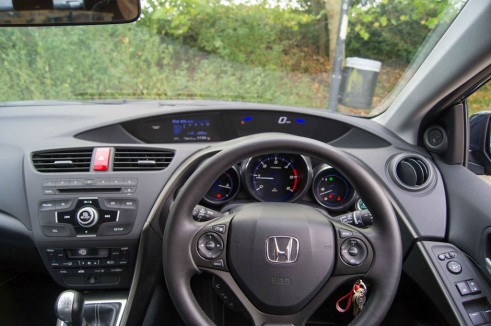 You still get the space age style split level dash, the lower half gives you temperature, rev counter, and fuel level; whilst the upper houses the speedo and infotainment display. It’s a bit of a disjointed setup, but you get used to it.

The most annoying part is the infotainment display, changing from one menu to another or messing about with the trip computer takes forever and isn’t at all intuitive. Some functions just can’t be changed via the wheel controls – like changing iPod playlists, that’s a bit frustrating!

The rear view camera is very handy as the boot is rather high, we didn’t find the split rear window beam to be a problem; but the blind spots in this car are huge due to the deep rear pillars. 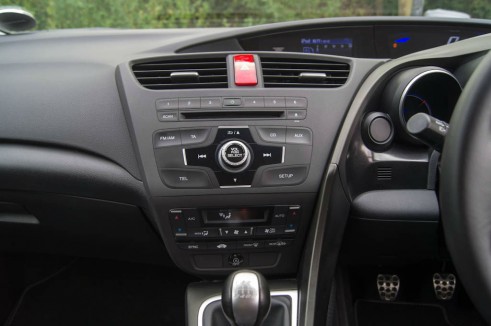 Sound was very good through the six speaker system, it had a good level of bass and clarity. If you opt for top level EX trim you get ‘premium audio’ with a subwoofer, but the six speaker setup was ace. 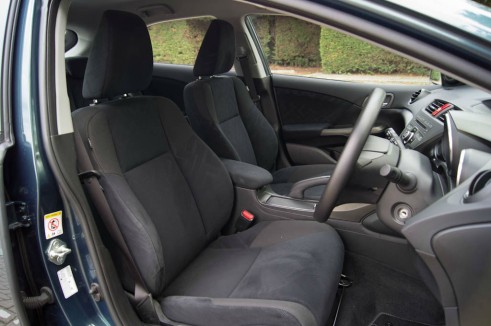 Up front the seats are comfy and supportive enough, you get the typical Japanese velour type cloth and our ES model had a leather wheel and gear knob. 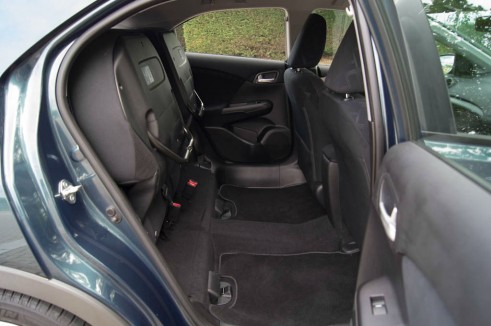 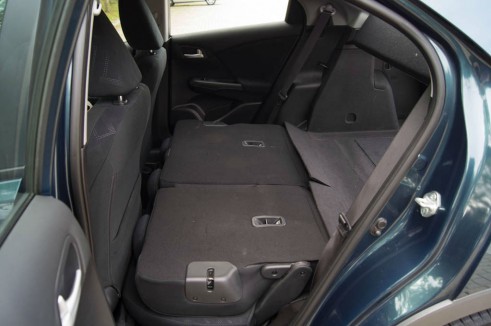 The back seats are the clever part though…dubbed ‘magic’ seats they can be changed into two different positions. The first being that the lower half can be pulled up and clipped in to create a huge load space behind the front seats; the second position folds completely flat in line with the boot floor turning the Civic into a huge enclosed pickup! 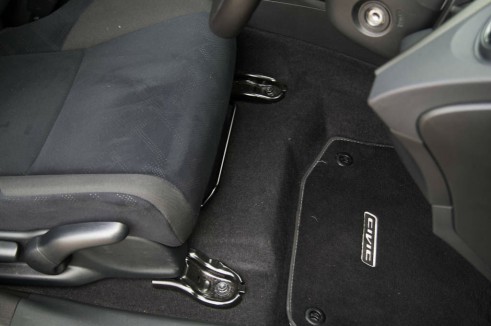 Due to some nifty engineering Honda have also moved the fuel tank to under the front seats, now this does create some boat like sloshing when manoeuvring on and off the drive at low speeds – but more importantly it frees up tons of space in the boot! A huge 477 litres in fact, with the seats folded down that turns into 1,378 litres. Civic, it’s more like a Tardis! 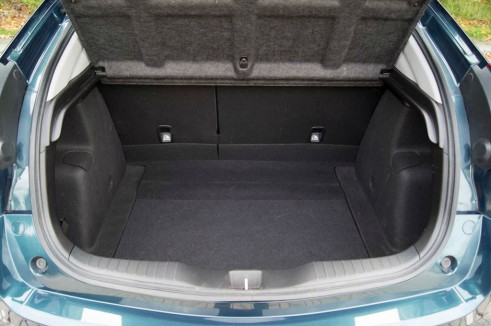 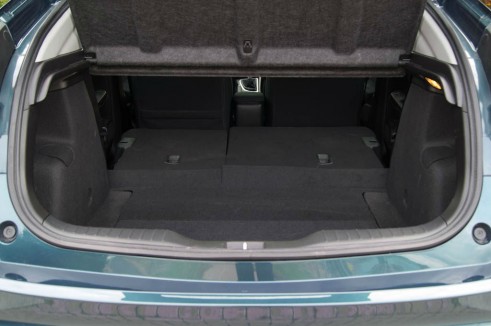 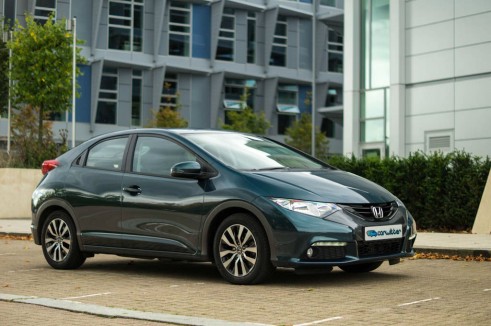 I love this Civic, superb MPG, functional practicality, good handling and great kit. It has to be the perfect family hatchback, great for commuting long distances every day, with enough room for the kids and all your luggage on a weekend away.

ES trim starts at £20,780 which is on par with rivals like the Golf and Focus so it’s not badly priced either. Basic SE trim saves you around £1200, but for the added extras you’re best off spending more and going for the ES model. 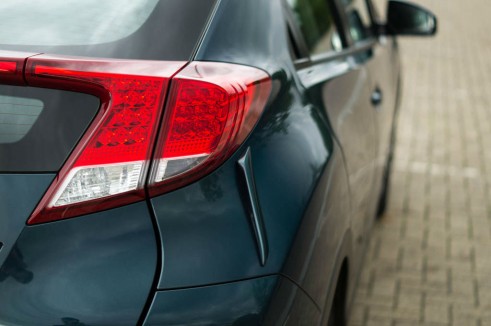