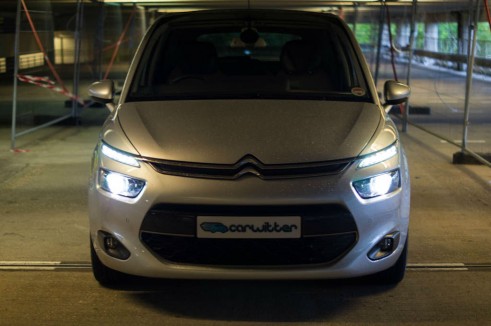 Citroen launched its inaugural Picasso back in 1999, aimed to compete directly with the Renault Scenic it was one of the first compact MPV’s. The latest model the C4 Picasso aims to be ‘a true expression of Citroën’s ‘Créative Technologie’’. 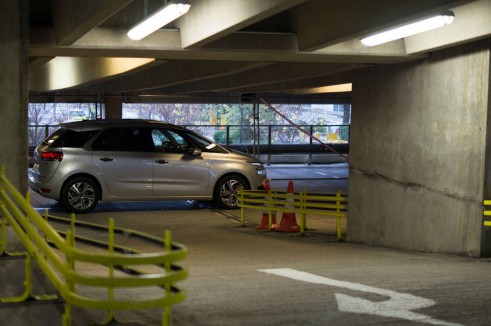 Looks wise I think this is a marmite car, you either love it…or you hate it! Personally I think it looks great, when Citroen first announced the ‘Technospace’ concept at Geneva earlier in the year I didn’t think it would enter production looking as modern and radical as the concept. Low and behold 8 months later I’m driving it!

It’s a more squared off look to the previous C4 Picasso, with a snub bulbous front end, leading to a steeply raked extended glass windscreen. The whole roofline has a floating look to it thanks to lots of glass and gloss black window trims, at the back a large clamshell boot houses some very cool 3D rear lights; a feature becoming synonymous with Citroen. 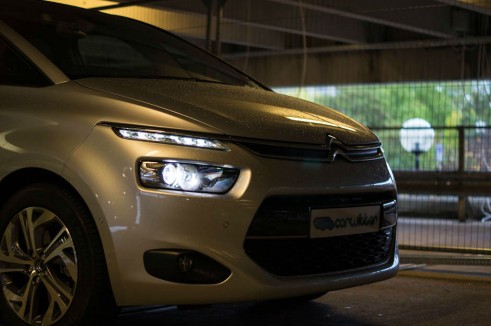 It’s a very modern, futuristic interpretation of the MPV as we know it. It works, and more manufacturers should be brave and push the boundaries of design. The way the chevrons lead into high set LED running lights (while the actual headlights are situated lower down in the front bumper) is unique, it gives the C4 Picasso a mean looking presence. 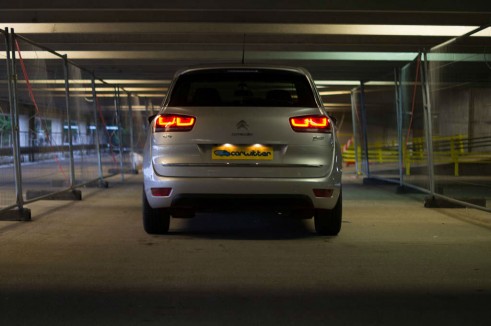 Now with only a 1.6 diesel unit the C4 will never be quick, at nearly 12 seconds to 60 it’s a tad on the slow side but it never feels sluggish, or that its struggling; which is quite impressive seeing as it only has 113 BHP.

Steering is very direct and responsive, which is impressive for the type of vehicle it is, turn in is instant and there is a slight amount of feedback through the wheel which is also nice.

When cornering there is a fair amount of body roll, which is bound to be had in a car this size. Ride over lumps and bumps is good, you can still feel the road below you; it doesn’t shimmy perfectly over imperfections. The Citroen’s springs seem to be a little soft though, this is most noticeable when changing gear…which is the only real gripe we have with the car… 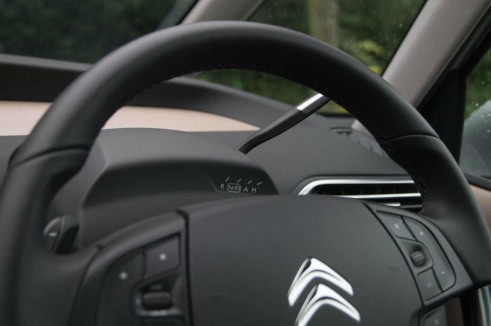 Our car was fitted with the Efficient Tronic Gearbox 6; or ETG6 for short. This gearbox is a clutchless manual, even though it only has R, N, A, M it isn’t a fully blown auto ‘box – for that you will have to wait until 2014.

To put it nicely its not very good at all, yes it works and gear changes happen but that’s about it. Changing up in Automatic mode makes the car lurch forward with every change, the nose of the car dips and lifts when each new gear engages (soft springs don’t help this motion!). 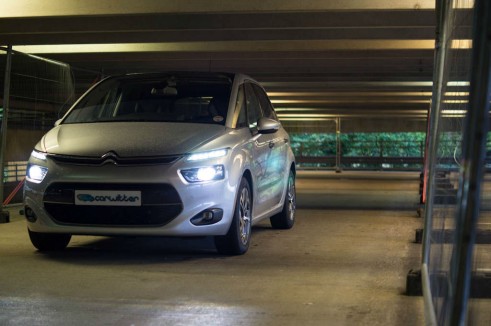 Even when we tried the gearbox in manual it would still lurch on up changes – and even down changes, the only way we could get it to change smoothly was to fully lift off the accelerator, change up, and then continue accelerating. So if you are going to buy a C4 Picasso forgot the ETG6, go with a manual.

Secondly is the lane departure warning, in the majority of cars we have seen this in the steering wheel vibrates to tell you that you are drifting lane. Most of the time you can barely feel this vibration and it doesn’t grab your attention at all. Citroen have gone about it another way, drift over the white line without indication and your seatbelt gets pulled and released very quickly for a few seconds – the first time it happened I jumped out my skin! 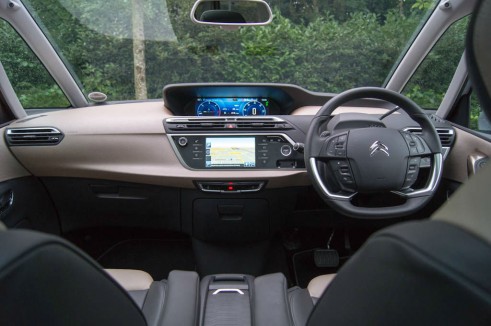 Once inside the C4 the futuristic theme continues, gone is the normal dial binnacle that sits in front of the driver. Instead it has been moved to a central location where you find a large 12 inch HD screen. This shows your revs, speed, gear, MPG and all manner of vehicle dynamics, the display theme can also be changed.

Below that screen and within arm’s reach is a 7” touch screen, this controls ALL the vehicle parameters. From the air con and sat nav, to the stereo and even the internet! Its intuitive and easy to use, it keeps the rest of the dash button and clutter free – very modern. 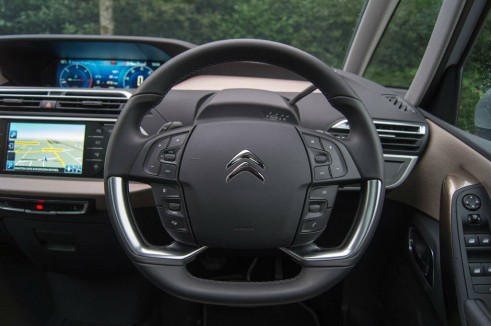 Between the two front seats a large storage console can be found (on automatic versions), if you need more space for longer objects this unclips completely and can be removed, very clever. 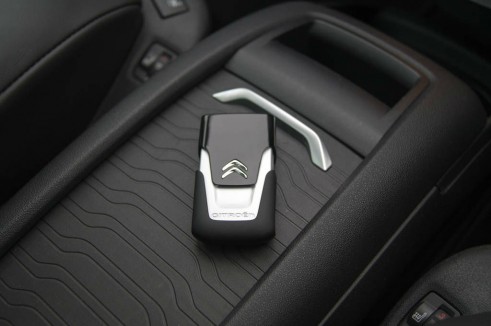 To get online you have to use Citroens Multicity Connect, a USB 3G adapter that plugs into the central cubby hole. This gives you access to things like Tripadvisor, Michelin parking locations and many more Apps. It’s a great feature for passengers to use whilst on the move, but it does take a while to initially connect – which is a shame as its quicker to find out the same info on a smartphone. 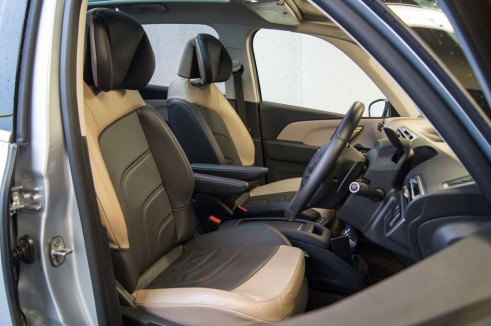 Dash quality and plastics are superb, the soft Nappa leather our car was fitted with was a real DS style hand me down. 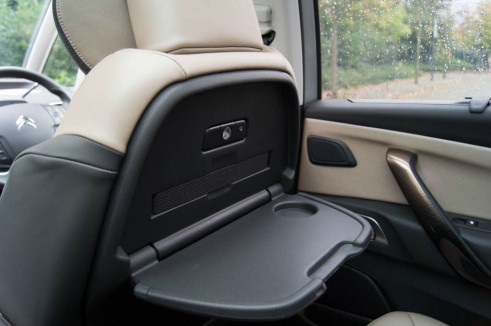 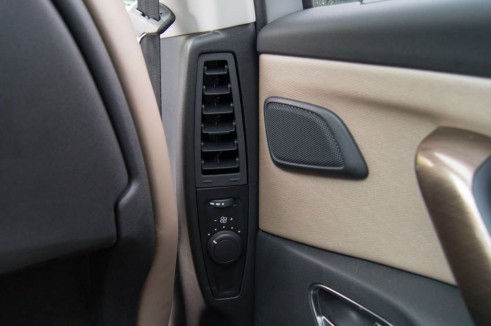 Rear passengers aren’t left out either, fold down tray tables feature their own LED reading lights, and fans situated in the C pillars can be controlled independently. 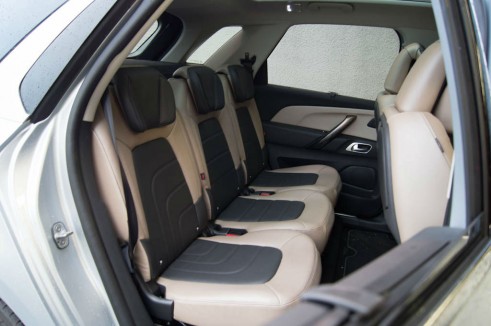 Legroom is very good, 3 adults could easily travel in comfort, with good headroom also a plus.

The rear seats can move forward to increase the boot capacity to 630 litres, if the 537 litres wasn’t already enough. Under the rear passengers feet there are two storage bins, another handy use of space. 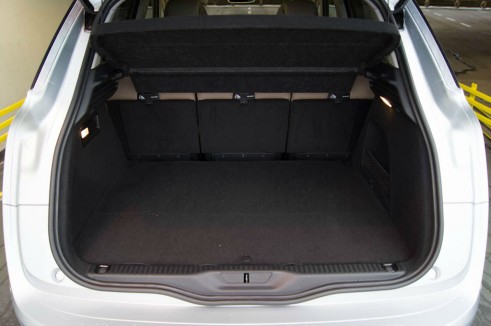 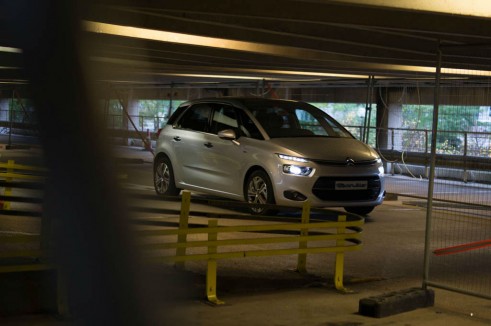 Citroen have really stepped up to the mark with the new C4 Picasso, DS style and quality is finally washing back toward the rest of the Citroen range. Premium quality materials are matched with clever, creative design elements that really make the C4 an ingenious, family-friendly vehicle.

We would avoid the ETG6 gearbox at all cost, but we can’t argue with the astounding 47 MPG we achieved over 255 miles of driving – there was still another 150 showing before we hit empty.

The little 1.6 e-HDi diesel is the engine to go for, it offers good performance and emissions of only 105 g/km when combined with the 6 speed manual gearbox. 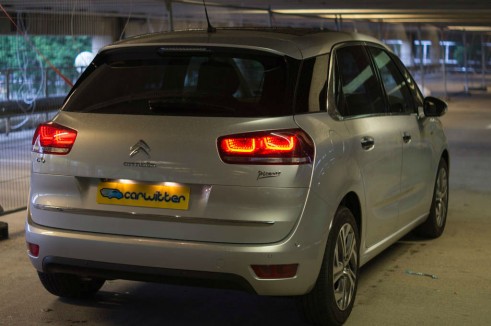 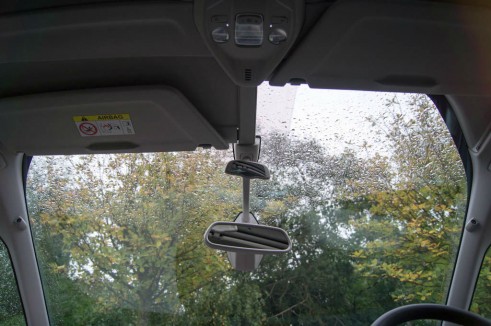 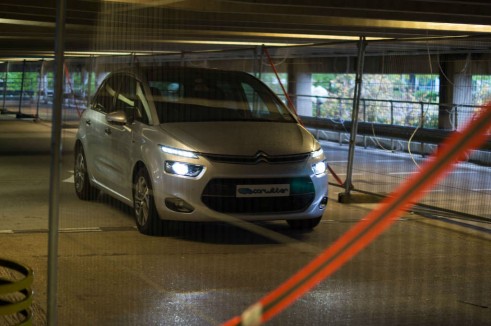